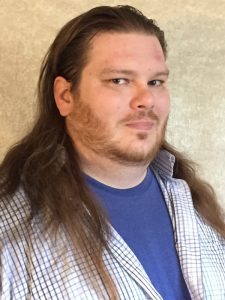 Welcome, Adam J. Whitlatch, to the BOD author spotlight interview.  I’m excited to get to know you a little and for all our BOD members to get to learn a little bit about you and your writing.

Thank you. It’s my pleasure.

Adam, can you tell us a little about yourself and how you got into writing?

I kind of fell into writing by accident in high school. I was a geeky teenager (I’ll pause a moment to let the readers get over the initial shock of that statement) in a rural community. Believe it or not, I’ve never played a game of Dungeons & Dragons in my life. I did, however, play Vampire: The Masquerade. Or at least I tried. Unfortunately, the guy running our games was more preoccupied with being seen holding the handbook while wearing a trench coat than he was with actually playing.

So to pass the time, I took my characters and began writing short stories. Those stories eventually became my first (as yet unpublished) novel. I don’t know whether that book will ever see the light of day or not, but it’s how I got my start. And I think all writers have that one “trunk novel” tucked away somewhere.

Oh, fun. I love learning about an author’s past.  And it’s clear that those first writing years were informative in writing The Weller. Would you mind telling how The Weller came to be?

The Weller started out as a standalone short story. The idea came to me one morning while I was washing dishes with Mad Max Beyond Thunderdome playing for background noise. Remember the scene with the water merchant peddling radioactive water? I wondered what kind of person would take that on as a legitimate business. They’d have to be a tough-as-nails bastard because everybody would be out to get them. I started getting an image in my mind of a wasteland vagabond in a brown duster with red hair… carrying the most ridiculous gun my imagination could conjure. I loved it.

So I wrote The Land of Plenty, set it in an old hometown I don’t particularly miss, and I proceeded to destroy the town in spectacular post-apocalyptic fashion. The hero got what he needed and rode off into the night. I never intended to make a larger story out of it, but my dad insisted. He demanded more.

I tried selling a series of Weller short stories to magazines, but nobody was biting. Then Skullvines Press took it on as a Kindle exclusive, but they quickly abandoned the idea when the editor fell in love with the character. He wanted a full-length novel. And so the first Weller novel was born.

Fascinating.   I knew that Mad Max had influenced The Weller. Are there any other dystopian books or movies that influenced this story as well?

Mad Max was an obvious influence. Vampire Hunter D was another. I loved the ruined world with only a few bits of advanced technology in a western setting. I always liked westerns but wasn’t really a cowboys and Indians kind of kid if that makes sense. Bravestarr was one of my favorite cartoons as a kid. It answered my prayers for a “different” kind of western. Rurouni Kenshin inspired me as well with its wandering swordsman protagonist. I always saw Matt as a ronin of sorts. 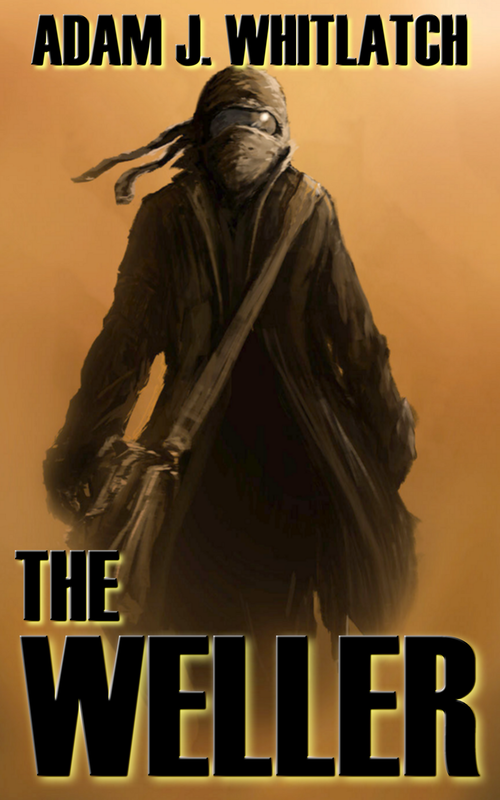 Speaking of westerns, Matt Freeborn totally comes across as a pretty complex cowboy. I found myself hating him, feeling sorry for him, then cheering him on.  What can you tell us about him and his character development?  Is he based off of any real people or complete imagination?

I always intended Matt to have questionable morals. I wanted readers to see both the best and worst of humanity in him because I think that’s exactly what a person needs to embrace in order to survive on their own in such a harsh environment. By the end of the book, I hope the reader feels as fond of him as I do. Because even though he can be a real dick at times, he’s broken… just like all of us are in some way. Over the course of the next few books, I hope to show readers why he’s so broken.

Matt’s not based on any one person, but I can see qualities of my loved ones in him. I see some of my best friend’s bitterness and world-weariness. I see my father’s pragmatism. He’s just a hard, tired man. He’s very much a product of a hard life. But I also see a little of myself, that part of me that always wants to do the right thing, even if it goes against my better judgment.

I like characters like Matt, characters that make you like them even though your gut says you shouldn’t. He’s not the only character I’ve pulled that trick with.

You definitely succeeded in creating a memorable main character.  Now on to Distillers. They are the perfect worst bad guys.  What can you tell us about them?

I needed a villain scarier than anything else the wasteland could throw at the heroes. Matt shrugs off mutants and guns, so the big bad needed to be the stuff of nightmares. I thought, why not a bogeyman of sorts? I like vampires, but I wanted The Weller to be grounded in reality, so I created vampires who were also human beings.

Wasteland children are raised on tales of the distillers, warned that if they’re not careful the ghouls will snatch them from their beds and suck them dry of their body’s moisture. They’re spoken of in hushed tones. Not only are the distillers the stuff of nightmares, they’re also competition for wellers, which makes them the perfect villain for this story. The thought of drinking water harvested from the dead makes my skin crawl, so I decided to share that fear and discomfort with the readers.

What other kinds of stories have you written or are you writing?

I started out writing horror and urban fantasy, but my work took a distinct shift toward science fiction around the time I started working on the first Weller story. I’ve written a film novelization based on the animated movie War of the Worlds: Goliath, a sequel to the original H.G. Wells novel. Picture Teddy Roosevelt shooting down flying saucers with a machine gun. I love my job!

My latest novel’s a young adult military science fiction story called Birthright. It follows an Iowa farm boy and his three alien bodyguards as they try to stop Genghis Khan’s evil clone from taking over the world. It’s by far my favorite story so far.

My current project is a novelization of the upcoming film Oceanus: Odyssey One, an underwater adventure starring Malcolm McDowell coming from Future Dude Entertainment in 2017.

And to answer the question I’m sure everyone’s thinking: Yes, there is a sequel to The Weller in the works called Fear of the Dark.

Awesome.  You’ll have to keep us updated on when it releases.
Who or what is your favorite dystopian/apocalyptic go to author or book?

Alas, Babylon by Pat Frank will always be my go-to book. My dad introduced me to that book when I was in high school. It was required reading in his class when he taught social studies. Every time we see a used copy in a bookstore, we have to pick it up. A careful reader will probably pick up a couple thematic nods to Alas, Babylon in The Weller.

Do you read your favorite books over and over again, or are you more a one and done kind of reader?

I have a few favorites I like to revisit every few years. Michael Crichton’s one of those re-readable authors for me. I think I’ve read Jurassic Park seven times and Rising Sun at least three. I keep a pocket edition of The Hobbit in my bug-out bag. It’s fun to read an old favorite to see what I might have missed, maybe find some new meaning in it that flew over my younger self’s head.

Now tell us some fun random facts about you.  If you could be reincarnated as any famous person who would it be and why?

Wow… that’s a tough one. Without dwelling on the question too much, my first answer would be Robert A. Heinlein. The man was such a brilliant writer with an unparalleled wit. I’d give anything for just an ounce of his talent.

Music is actually a major part of my writing process. It really depends on the genre I’m working in. For The Weller, I listened to a lot of classic rock on Pandora, particularly Blue Oyster Cult since that’s the character’s favorite. For Birthright, it was more electronica. Some of the bands in my writing playlist are Breaking Benjamin, Metallica, Halestorm, V Shape Mind, Assemblage 23, and Neurotic Fish. Sometimes a film score will find its way into the mix as well. It all depends on the mood of the scene.

I find it amazing that writers can create with music in the background. I get too distracted and start singing along.  I need white noise to write.  Maybe I just haven’t found the right soundtrack yet.
But back to you, is writing your main career or more of a hobby?  Regardless, if you could have the perfect occupation, what would it be and why?

For the past few years, writing’s been my career, but for a long time, it was both work and hobby. I realized that recently and a few months ago took up the guitar, which I’m enjoying immensely so far.

The perfect occupation? Well, I always wanted to be a paleontologist. I was a dinosaur nut as far back as I can remember. Unfortunately, it means long days in the hot sun, digging in the dirt, so maybe it’s not so perfect as my ten-year-old self-envisioned, but it’s one dream I had before writing took hold of me in my late teens.

Thank you, Adam, for spending time with all of us at BOD and for sharing your writing talents!

Adam J. Whitlatch is a speculative fiction writer and freelance editor. A fantasy enthusiast from a young age, his interest in science fiction was first sparked at the age of ten when his father played the infamous 1938 Orson Welles War of the Worlds radio broadcast for him on Halloween. It’s a tradition Adam carries on to this day.

From 2012 to 2015, Adam worked as an associate editor with KHP Publishers, Inc, managing their science fiction imprint Retro Rocket Press.

Adam lives on a small farm in southeastern Iowa with his wife and their three sons.