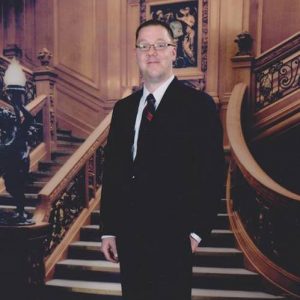 Hey all you fantastic BOD members, thanks for reading! Check out this week’s author spotlight. I’m very excited to introduce and interview A.J. Leavens. Welcome!

Hello! Thanks for having me. It’s been fun getting to know all the cool folks on the blog and the Facebook group, and I’m humbled to be chosen for the spotlight.

A.J., why don’t you tell us a little about yourself and how you got into writing?

I’ve been reading forever. I loved the escapism that books provided. When I was 12, I fell in love with Piers Anthony’s Xanth series and Terry Brooks’ Landover series. I read them as fast as they came out. When I hit Grade 8, I wrote a story that took my favorite characters from both series and melded them into one book. It was full of magic and crazy powers. It really got the bug going.

By the time I hit high school, I was hooked. I took English all the way to Grade 13 – it’s an Ontario thing – and was even selected to be part of a new writing development class that they were piloting with a poem I wrote entitled My Father, The Tree. Somewhere, my dad has a copy of that, framed.

I prefer to write fantasy and sci-fi, as it allows me to use my over-over-active imagination, but I’m slowly working on a mystery novel also. It’s a long work in progress that keeps getting put on the back burner.

I really enjoyed your first book in the Meechan Chronicles. Can you tell us where you came up with the setting for Death’s Twilight?

Thanks! It means a lot to me when someone who is a fan of the genre enjoys Slade’s world. In the opening scenes of Death’s Twilight, the reader is introduced to the world after the bombs, and it mentions that George Washington found a Risk board in the Smithsonian.

My wife and I were playing Risk with my teenaged sons, and I looked at the game board and asked, “What would it take to get the world to actually align itself like this?” The first answer that popped into my head was Nuclear War.

I took a picture of the game board and used that as a basis for the world, circa 2308. I wanted an elitist society to exist (The Emissaries), but with a Big Brother feel to it. That’s how IRIS came into being. Meechan Chronicles Trivia Fact: IRIS is SIRI’s really evil cousin 😉

You have some awesome fighting scenes in Death’s Twilight. Do you have personal knowledge of hand to hand combat, or are these scenes results of intense research? 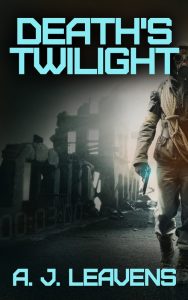 A little of both. I took Karate and Aikido as a youth, and those lessons have always stayed with me. Hotaru’s washroom fight scene was written based on some of the teachings I received. Her training session when she is praised by Lao Shi was the result of weeks of studying Tai Chi and gymnastics.

I also watched a lot of fight scenes in movies and on YouTube, especially ones that were specifically hand to hand. I’d watch them in slo-mo, backwards and forwards to make sure I was getting the feel of the fight, and how bodies would react to the things the characters were doing to them.

There is pretty clear message about the power people have in law enforcement positions, and how they go about administering the rule of law. What do you want readers to take from reading Death’s Twilight?

I hope that people will see Death’s Twilight for what it is – a story. I find it quite amazing that some of the things I wrote into the book (postal mail being finished by 2015; Canada Post announced they are stopping home delivery in January, and Crimea being an independent state) actually coming into existence. Even more amazing considering I finished the book in 2012.

There have been some recent developments in the world that highlight (to extremes) what can happen if the wrong people have power – or the right people have power but choose to wield it wrongly. What I want readers to take away from Death’s Twilight is that yes, there are corrupted people (systems) in the world. There always have been and probably always will be. But if the people who know about it are willing to stand up and do something about it, there is a chance for hope and peace.

Can you tell us where Slade’s story is headed in the next book? And when will we be able to read it?

Slade, Brooks, Nathaniel, and Hotaru are off to stop IRIS. Brooks has been keeping a journal that contains clues to help them. Along the way, Slade meets some new friends, makes more enemies, and discovers something about himself that he thought he had lost. They travel around the North American continent in their search for the things they need to stop IRIS.

I am 60ish% done with the first draft and have a goal of releasing the final product February 17, 2015. Folks who can’t wait that long can get a serialized, beta version of the story via email starting this month. I’m also hoping that these folks will be additional sets of eyes to point out any glitches I’ve missed. (Link)

Now tell us some fun random facts about you. What kind are your go-to books to unwind?

Random? Hmmm…I own a still sealed Beatles Blue Album (my all-time favorite band). My favorite gum flavor is cinnamon. I have CDO (which is like OCD, but in the correct alphabetical order).

I love books that can make me laugh out loud when I read them – not necessarily from comedians or the like, but just from the happenings in the book. Janet Evanovich’s Stephanie Plum series is one that does it every time. So is JR Ward’s Fallen Angels series. My go-to genre though? Vampires. Anything with vampires. Absolutely love vampires. I have ever since I met Louis and Lestat in Interview With the Vampire.

It completely depends on what I’m writing. Music is a very important and motivating thing for me. When I’m writing a chase scene or a fighting scene, I need something upbeat, almost techno. If I’m writing something sad or moving, like when Slade reset Sarah or the scene between Hotaru and Kozel, I listen to somber music, usually a piano concerto or similar. I draw from the music and try and put that emotion into the scene.

For Death’s Midnight, though, I was lucky enough to stumble onto a local indie band (The Neutral States) whose music fits the changing world near-perfectly, regardless of what type of scene I’m writing. They definitely have more plays on my iPod than any other in my writing playlist.

A.J., I love Slade’s boomstick as a weapon of choice. If you lived in a society where it was completely normal to carry such a weapon, what would you choose and why?

I would have to say a sword – samurai or 17th/18th Century. There is something elegant about a sword – from the skill needed to craft a sword, to the training needed to properly wield one. I’m not talking about hack and slash. Think The Three Musketeers and The Last Samurai, not Highlander. Graceful, yet deadly.

Truthfully, though, if I could find a way to create a Boom Stick like Slade uses? I’d be all over that.

Thank you so much A.J. Leavens, for sharing your time and gift of writing. It has been a pleasure to get to know you, and to learn about the fun world you have created in The Meechan Chronicles.

Thanks to you for the opportunity! I’m open to questions from any of the members. Would love to chat and get to know you all better. Feel free to connect!

A love of reading as a kid allowed me to explore worlds with dragons, spaceships, robots, and antique cars. I’ve always had stories in my brain, and I’ve finally had the time to let them out onto the page. I’m a father of 4 who’s been married for 15 years. My kids may or may not be inspirations for characters in my works.