Thank you so much, Mara, for taking part in the BOD author spotlight interview! Our BOD family is in for a treat to get to know you. 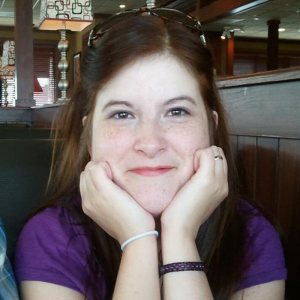 Thank you so much for having me! I’m thrilled to be part of BOD. It’s one of my favorite places to browse on Facebook!

What was the first book you read that made you know you wanted to be a writer?

Honestly, I didn’t always know that I wanted to be a writer. I first fell in love with reading with Romeo and Juliet in middle school, but at the time my love of the characters and the story fueled my passion for acting. It’s funny, because that drive led me to write stories on my own—the kinds I would want to see. But I never called myself a writer. It wasn’t until I was in my mid-twenties that I sat down and wrote a book. That’s when I sat back and realized that I’ve kind of always been a writer, just never owned it until now. It was just something I did, something that was part of me.

Who have been your greatest inspirations for writing, and how have they helped you achieve your writing goals?

Jane Austen, as cliché as that sounds. Her story is just so amazing. A woman, in a time where women were meant to find a husband and take care of a household, who had so much passion for writing that she just had to do it, regardless of the consequences. And the stories she told still live on today, which just amazes me. On the fantasy end of things, I love Terry Goodkind and am way overdo for rereading the Sword of Truth series (and catching up now—there are more books! More Kahlan and Richard!!). His ability to build such a rich fantasy world with characters that are strong but also flawed and vulnerable just amazes me.

The Altar of Reality is the third book you’ve published and the first in a sci-fi dystopian series. Tell us a little bit about this book and where you came up with the idea.

Altar of Reality follows the story of sixteen year-old Madeline, whose epilepsy triggers an ability to slip between alternate realities. She doesn’t know she can do this, so she thinks she’s losing her mind as she flips back and forth between the life she’s always known and a reality where she finds herself in the aftermath of the Cold War turned hot. 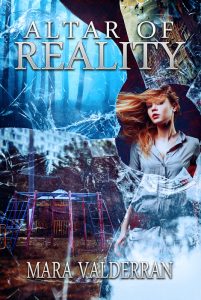 Funnily enough, Neil Gaiman is tied to the inspiration for my book directly. A friend of mine took me to see his storytelling event when it was here in Columbia. The idea is that a group of people, along with Neil Gaiman, get up on stage and tell stories. Like sitting around a campfire. It was really amazing, but I digress. The emcee for the event told his story in bits and pieces in between the others. He spoke about his wife and their experience with her epilepsy. And at some point, he said, “What happens to her when she has a seizure? What does she see, even if she doesn’t remember it? Does she go somewhere else?” And the thought struck me: What if she went to another reality? Thus, Altar of Reality was born. I used some characters I had created when I was around 19 or so for a screenplay that I had been wanting to play with again. And then I wrote the book for NaNoWriMo, pitched it during the Twitter PitchMas event the next month, and got a contract with Curiosity Quills.

I love that you tie sci-fi with the dystopian genre. How do you think this genre is affecting the young adult writing/reading scene?

Thank you! Dystopian seems to be all the craze right now with The Hunger Games, The Maze Runner, and so many other huge hits out there. I think as far as genres go, the scene kind of comes and goes, so I’m not all that surprised to see dystopians as popular now. Personally, I love it. Reading is such an escape, and sometimes it is really great to read about characters who overcome the worst situations and persevere. That’s not an uncommon theme in literature, of course, but throwing in the brink of an apocalypse does tend to put things in perspective. =)

I can tell you that Madeline is going to be very torn in the next book. Without giving too much away, obviously she finds herself in a very difficult situation and surrounded by faces that used to give her comfort and a sense of security that are now potential threats. She doesn’t know who to trust, or if she can even trust herself. And she might be seeing that the Lord Commander isn’t as evil as she thought. It isn’t always black and white in a war or a time of struggle, and she starts to see that, which is very difficult for her. That doesn’t mean she can forgive him, though, even if she might find herself in a situation where she has to choose between playing the good dutiful would-be daughter or getting tortured.

As for the love interest, I think I wrote myself into a love triangle on accident. Austin was supposed to be a minor character, but now he has a POV in book two. But then again, Brandon will have a POV in book three. I might be just as torn as Madeline on this one. 😉

Why don’t you tell us about the other books you’ve written and do you have any other writing projects you’re working on?

My other series is a new adult fantasy series called Heirs of War. It’s very much a family driven story. The Duillaine are the ruling body of all the worlds, the four most powerful women born into the same bloodline and each representing an element. They’ve been fighting against a brewing rebellion for generations, and things are getting really bad. When the fifth is born into the next generation, it causes a ripple effect due to a prophecy about the five uniting all worlds as one. The five girls are sent away, and four are sent to our world with the protectors blood-bound to them. They don’t remember anything of this magical world or their real families. When the rebels discover them, they are forced to come back early and thrust into the middle of a world and a war they know nothing about. Zelene and Ariana are the twins, the two youngest, and they drive a lot of the story. They’ve never met and have lived very different lives—Ariana growing up in a normal and loving household (and a bit spoiled) picked out for her, and Zelene bouncing around from foster home to foster home when our laws prevent their shared protector from adopting her. Zelene is very much a solo act, so all of this is a lot to take in for her when she finds herself surrounded by relatives and people clamoring for her attention. She wants nothing to do with any of it and basically tells them all to screw themselves. But when she finds out she has a twin that has been captured… her priorities shift. She’s deadest on saving Ariana, and isn’t content to wait around for the current generation of Duillaine to get off their royal butts and do something.

The second book in the series (Heirs of War, Crown of Flames) came out in October and I’m hoping to release the third book by the end of this year. I’m also already working on book two in the Shifted Realities series, which I might call Fractured Minds. The two series keep me busy, but I have been discussing a superhero serial with a good friend of mine, so we’ll see. 😉

Now on to some fun facts about yourself. I love the idea that there are alternate realities that we could exist in. If you lived in an alternate reality, what would it be and which reality would you choose to stay in?

If there is one author or time period you could travel to for a writing conference, who or what time would it be and why?

I would want to bring Jane Austen here, really. I wouldn’t necessarily want to be a writer in her time, but I’d love to get a one on one with her. I’d love to one day attend BEA, or attend a conference with Susan Kaye Quinn. She’s such an inspiration, and always has an abundance of knowledge and experience to drop on you at any given second. (Can you tell that I Facebook stalk her from time to time? Hehe)

It’s been a pleasure to get to know your writing and getting to share your awesome talent with the members of BOD. Thank you so much for being a part of the BOD family!

Thank you ALL for being so amazing!

Sixteen year-old Madeline has struggled with epilepsy for most of her adolescent life, leaving her something of a social pariah. Things go from bad to worse when she wakes up from her first grand mal seizure in an extremely unfamiliar world but surrounded but familiar faces. Her hometown is in ruins, the aftermath of a Cold War turned hot.

Madeline isn’t sure what to believe. The brothers insist her memories must be of a dream life she created while in her coma. But when she returns to the reality she knows, they insist this war-torn world must be the dream. She doesn’t know if she’s truly caught in the middle of a brewing rebellion or teetering on the brink of insanity. As she finds herself flipping between the two lives, her heart becomes torn between two versions of the same boy and the lines between her realities begin to blur.

Mara Valderran is an author of young adult and new adult books, but she’s more than just a madwoman with a writing box. She is an avid reader and fan of all things sci-fi and fantasy. She loves roller skating and movies, though typically not together. She hopes to one day meet Daniel Jackson from SG1, or at least the actor who played him. When she’s not writing, you can find her reading, playing video games, or counting down the days until DragonCon.

Her debut novel, HEIRS OF WAR, has been met with great reviews and was featured on Wattpad in 2013, raking in over 600k reads. The series continues with the second book, HEIRS OF WAR, CROWN OF FLAMES, released in Summer 2014. Her short story “The Austenation” will is included in the Borderlands Anthology and she is looking forward to publishing her young adult dystopian ALTAR OF REALITY with Curiosity Quills Spring 2015.