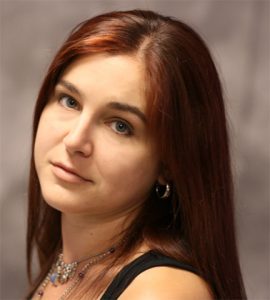 Hi Katie, thank you so much for taking the time to do this interview for all your fans, myself included. It has been truly wonderful to be able to interact with you on the Band of Dystopian Authors and Fans group page.

Thanks so much for having me here. I feel honored! I absolutely love the group Band of Dystopian. It’s a great place to pop in and hang out. You guys run the best contests and those “would you rather” questions… Love them! I try to make it a point to pop over at least once a day to see what fun you guys are having.

When did you discover that you enjoyed writing, and when did you realize that you wanted to make it a career?

Writing is in my blood. I’ve been doing it since I was just a little girl. Of course the stories I wrote back then were sweet and innocent, not the gritty fiction I write today. I was always jotting down craziness in my journals. One of these days I’ll find them. I know they are packed somewhere in my garage. By the time I hit middle school I was typing out my first novel on my old Apple IIc computer. I miss that old box with the green screen. Sadly though, that manuscript was lost when we moved cross country. Those floppy disks were pretty breakable… But, that didn’t stop me completely. It would be almost ten years before I wrote another full-length manuscript, but I did. The start of my Immortalis series was the next major work, and what propelled me into indie publishing.

As a busy mother of three, how do you find the time to write? Do you use anything to sustain you during the writing process? Caffeine? Music? Chocolate?

Caffeine… lots and lots of caffeine. Seriously, I should probably be dead of a heart attack with as much of the pepper-upper potion as I drink. With three kids (two still in diapers) sleep is something of a treat. The Littles, as I call them, are morning people. My older one knows the value of a good morning’s rest. She’ll sleep ‘til noon if you let her. Good girl! But the babies, nope. They are up with the sun. And that means I am too. And writing, ha! None of that gets done until the house is quiet. Other authors will back me up on this. You need a certain kind of quiet to write. That doesn’t mean silence. It’s more of a white noise or a mood noise effect. The right music works, or maybe reruns of a tv show you know by heart. But nothing jarring. No kids hammering you with requests. No husband bothering you. To write you need to hear only your muse. So, with that said, I only have that kind of quiet after the house is sleeping. Which makes for a lot of late nights and a mom-zombie every morning. And that is where the caffeine comes in. I drink it damn near all day in whatever form I can find. 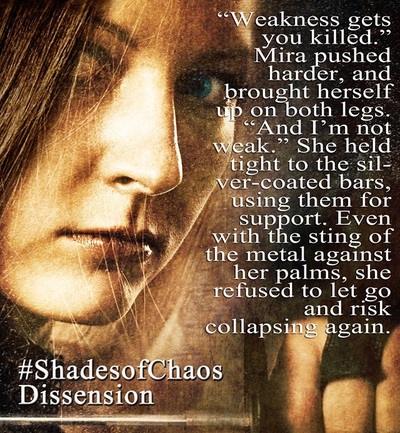 Besides dystopia, what other genres do you write? Is there a genre that you would like to cut your writing teeth on in the future?

I dipped my toes into the Dystopian genre with the Chronicles of the Uprising, but I do have works out in a variety of genres already. I have a pen name which handles Paranormal Romance. I am in the process of moving my erotica titles to a new pen name as well. And then there is my other love, Urban Fantasy! That’s what I cut my teeth on. My Immortalis series is a gritty Urban Fantasy set in modern day Las Vegas and Boston. My writing tends to lean towards realism rather than fantastical, however, I would love to attempt an Epic Fantasy one day. Those are such difficult books to do because of all the tiny world-building details involved. I think it would be pretty labor intensive, but rewarding.

I love a fierce female protagonist and Mira, the enslaved gladiator vampire, certainly fits the bill. She is a bit of a realist and has an outlook that isn’t very cheery. In Revolution, Mira said, “Positivity doesn’t get you anything.”  Do you also subscribe to that philosophy or are you more of an optimist?

I’m certainly not as jaded as Mira, but I do tend to lean towards realism. It’s always nice to be hopeful, but to get things done, one has to work for them. I’d be lying if I said I didn’t put a little of my own self into the main character. I think all authors do to some extent. Mira, however has dealt with much more hardships than I have, so her perception is a bit exaggerated. She reacts harshly to her situation because she has not had anyone there to help her. Thirty years of bloodsport, torture, and having to destroy her own people had hardened her and colored her outlook on everything. Even when she does taste a bit of freedom, she does so cautiously because it could all come crashing down at any point, and she could end up right back where she started.

Although this series has romantic elements, I don’t see it as the main focus of the story. I love a little romance in my dystopia, but I have to ask, with the controversy swirling around love triangles, did you experience trepidation writing yet another love triangle?

I’d considered the romantic element when writing all three parts of this trilogy. And I wanted to delve deeper into that topic, however, looking at the main character Mira, it did not fit for her to be overly emotional and fall for someone so quickly. To remain true to her character, she had to be closed off. She can barely stand to have someone touch her to comfort her, how was she supposed to choose between two men obviously vying for her attention? So, with that in mind, I allowed her to acknowledge that the men were there, and that they both had good qualities, but not build on that until real trust was formed. Remember, Mira has been tortured for her entire existence as a vampire. Love cannot blossom until there are some basic elements. Trust is one of those most important elements.

As for the love triangle, I had no worries about making it part of the story because it fit the story. When I write, I have to be true to my characters and my plot. Altering things just for the sake of some readers feels wrong to me. You are never going to please 100% of the people. But, I feel, if you are true to the story, people will see it.

The love triangle between Mira, Lucian, and Stryker definitely ends in Revolution with Mira making a choice between the two. Did you know who she would choose from the beginning of the story or did the final outcome develop as you were writing?

Mira chose the opposite person I had originally selected for her. But, again, being true to my characters, there was really only one good option for her. She went with the person she could have a real relationship with. The other is still her partner and will remain by her side, but as far as a real romantic connection, there was no question… for Mira.

The desire of the otherkin to seek revenge against humans is an important theme in Revolution.  Mira faces her nemesis, the ultimate mean girl Olivia Preston, and has the opportunity to obtain sweet revenge.  Is the character Olivia Preston based on a real person?  If so, did writing Olivia’s finale serve as a form of revenge?

Is Olivia a real person? No. Does she represent people who might need a little comeuppance? Sure! Writing is sometimes a cathartic process. It’s nice to be able to exact karma on characters who really deserve it, especially when in life you see people get away with atrocities every day and never seem to have any recompense. And, for the record… I think Olivia got exactly what was coming to her.

As a vampire, Mira has supernatural abilities including a heightened sense of sight and her blood with healing properties.  If you could have a super power or sense, what would it be and why?

I’d take heightened sense of sight. I’m practically blind as it is, so being able to see clearly, without coke-bottle glasses would be a dream come true. LoL!

In your series Chronicles of the Uprising, there is an otherkin sanctuary hidden from humans.  Where is your sanctuary?

Sadly, I don’t have one. Unless you count the bathroom. LoL. But then, the littles find me. Mom of three kids, I’m never alone. Not that I’m complaining, it’s just the truth. No sanctuary for me for a while. But that is okay. 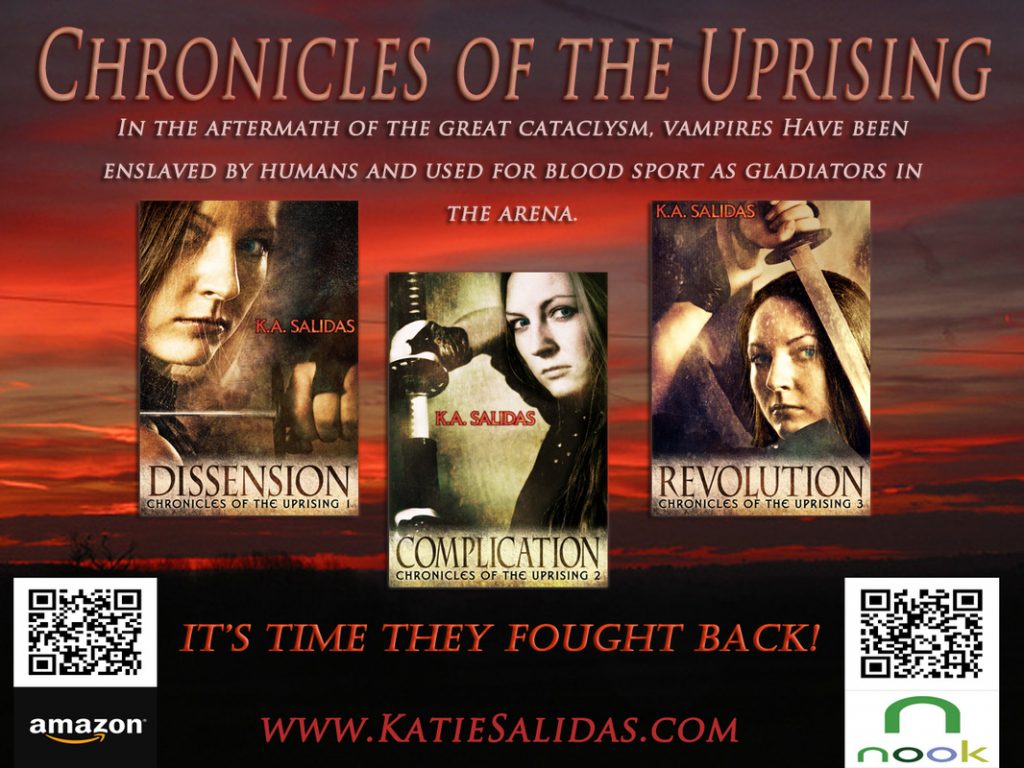 What can readers look forward next from you?  Do you plan of writing a fourth book this series? Do you have a current WIP?

Thanks again for having me here. Great questions!!

Katie Salidas, author of the Immortalis series (Urban Fantasy), Consummate Therapy series (Erotica), and the recently released Chronicles of the Uprising (Dystopian) is a Jill of all Trades. She’s a Super Woman endowed with special powers and abilities, beyond those of other mortals. Katie can get the munchkins off to gymnastics, cheerleading, Girl Scouts, and swim lessons; put hot food on the table, assist with homework, baths, and bedtime… And, she still finds the time to keep the hubby happy (nudge nudge wink wink). She can do all of this and still have time to write.

And if you can believe all of those lies, there is some beautiful swamp land in Florida for sale…

Katie Salidas resides in Las Vegas, Nevada. Mother to three, Wife to one, and slave to the craft of writing, she does try to do it all, often causing sleep deprivation and many nights passed out at the computer. Writing is her passion, and she hopes that her passion will bring you hours of entertainment.