Welcome, Vanessa Knipe, to the BOD author spotlight. I’m excited to get to know you and learn about how you became an author. Thanks for being with us!
​
Thank you for having me. I really appreciate you taking the time to arrange this.

For starters, tell us a little bit about yourself. Where are you from, when did you know that writing was what you wanted to do, and what’s your favorite thing about writing?

Now there’s a question and a half. I was born in Malaysia. My family moved to Australia when I was six months old. I had traveled one and a half times around the world by the time I was three when my parents moved us to the UK. I grew up in a very dark time; my mother took Civil Defense courses and learned how to make a Nuclear Fallout shelter with a door and several blankets. In my teens, my father’s job moved us to Texas. Currently, I live in Yorkshire, in the UK. The easy answer is that I’m from everywhere.

I only got into writing properly when I was widowed. I could no longer work in the NHS as a Biochemist because the shifts were incompatible with raising a child on my own. I’ve always written stories, but I needed something to do other than just child raising to keep me sane.

Is there any one book or author that has most influenced your decision to be a writer or your writing?

I have two favorite writers. The first one is Andre Norton. I spent my preteens writing what is now called ‘fan fic’ about her characters. I loved the Solar Queen series. My second choice of writer is John Wyndham – he wrote grand apocalypses like Day of the Triffids, though my front runner is The Kraken Wakes. In a way, Pill Wars is my tribute to the John Wyndham apocalypses.

What is your favorite book memory?

I was always told by my parents that I had to have a real job, writing would never make a living. I chose my career, as a Biochemist, because it is the career of the female main character in John Wyndham’s The Trouble with Lichen.

Now tell us about your books. What kind of stories do you like to write?

I have a real problem with writing because I cannot settle on one style. The linking theme in all my books is ‘Urban.’ Sometimes it’s Urban Fantasy with magic and other times its Science Fiction or Speculative Fiction, but it all seems to be in towns and cities as with Pill Wars or my time travel novel, Last Days Forever, which is set in Houston, Texas, and takes the reader through a very bleak future. At present, I seem to be writing an ‘Urban’ Epic Fantasy, and a Grimdark set in an industrial revolution.

Tell us a little about Pill Wars. What’s it about?

Pill Wars is mostly about deregulation of industry. At present, pharmaceutical companies are not required to publish the results of their trials. So mostly they publish only the positive results and brush the negative results under the carpet. Throughout Pill Wars, Jessica is carrying a folder showing real wrong-doing on the part of the drug company, Oakwood Industries. In the folder, it clearly states that without careful withdrawal of the drug, there are severe side-effects. The drug is supplied through just-in-time manufacture so no one has a backup supply when an ‘Act of God’ in the form of a volcano shuts down air travel. The owner of Oakwood Industries wants the folder back, the army wants the folder (to blackmail Oakwood Industries), so does the government (because it shows the bribes given and accepted to pass the drug for sale), and the opposition wants the folder to prosecute the owner of Oakwood Industries.

Oh, and it’s also about the worst first day at work ever. 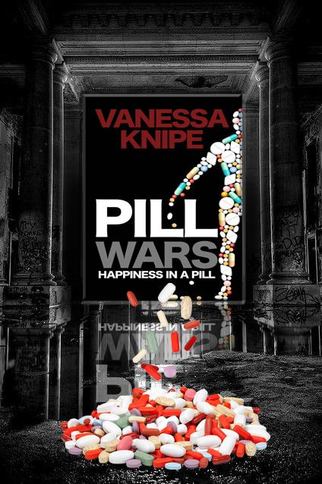 Where did you come up with the idea of having anti-depressants being the cause of creating zombie-like beings?

In my teens, one of my family members was on antidepressants. They were the old-styles ones, and the family member wandered around the house in a complete daze. We called them the ‘Zombie Drugs.’ Pill Wars has been a long time in the fermenting stage. I am a Biochemist, and I worked in the NHS. One of the many tests is keeping track of drug doses – some of these antidepressants have a small window where they are effective. Overdose and underdose present similar symptoms.

I think that the theme of a worldwide epidemic of depression influencing the main plot of Pill Wars is a very relevant topic to today’s world. Why did you decide to tackle this topic in the way that you did?

When my husband was killed in 2001, the doctors tried to convince me I should be on antidepressants. Depression is a chemical imbalance in the brain: there is no obvious external cause. I had a perfect reason to be feeling sad. Antidepressants wouldn’t have helped and might have harmed me. There were 61 million prescriptions for antidepressants in the UK last year – how many of those were to people who really didn’t need the zombie drugs, but didn’t know enough about medicine to say no? Writing Pill Wars was the only way I could get my concerns across about over-prescription of the medicines.

I love strong female characters. But I especially love ones that are relatable and realistic. Jessica is one of those characters for me—not knowing everything from the beginning, but having to discover her true human nature through the realities of her new apocalyptic world. What can you tell us about Jessica? What do you most admire about her?

I’m so glad you like Jessica. I have a real problem writing female characters. Because I was brought up to be a lady, and submissive to men, most of my female characters end up that way too. I had to think of Jessica as a ‘male’ character in order to prevent her from being passive in her own life. She is brought up in a very male dominated world, but she fights so hard for what she wants. I would have loved to have half her drive when I was in my 20s – I didn’t even dare send off a story to a publisher until I was 40.

If Pill Wars was made into a movie, who would you like to star as your main characters?

For Geoff, I think I’d go for Skander Keynes, who played Edmund in the Narnia films. Edmund is nicely conflicted and on both sides of the argument. For Jessica, I’d choose either Daisy Ridley (Star Wars) or Georgie Henley (again Narnia). They both played the sort of drive and determination I hope that shows in Jessica.

Do you have anything that you are currently writing/working on?

The world of Pill Wars is suffering badly from pollution and political corruption. The next story is Stellar Parallax, which involves Jessica’s granddaughter, Emily. The warming Earth has suffered huge meltdowns of methane clathrates, releasing the methane into the atmosphere resulting in runaway climate change, but never fear, there’s another planet all the humans can move to, but the poorest get left behind on Earth. A Parallax is the same problem looked at from two angles: the problem is survival on two different planets.

In your spare time or when you aren’t writing, what other day jobs make up your life?

I don’t have a day job anymore as I am a full-time career for my autistic son.

That totally is a day job! In my opinion, mothering is the most important job you’ll ever have. Do you have any quirky habits or fun talents you could tell us about?

I’m very good at making things with my hands. As a child, my son won all the fancy dress competitions he entered. I’m currently making the furniture for a dollhouse, in Steampunk fashion. I’m also fond of birdwatching and run a #birdtablewars on Twitter which features photographs of the wildlife in my garden.

How fun! I’d love to see some pictures of your creations. Especially your furniture.
Well, thanks again for being with us, Vanessa! All of us at BOD so appreciate your time and you sharing your talents with us.

Born in Malaysia, moved to Australia, Vanessa first saw England at 3 years old. As a teen, Vanessa learned her loved of canoeing in the alligator infested bayous of the Texas Gulf Coast. Now back in her favorite place in the world, Yorkshire, she watches the River Ouse rise every winter and wonders if she needs to revive an old skill: so far she and her son have been lucky. She juggles raising her Autistic son with wrestling the Creatures of the Night, though that’s not a nice thing to call her cat.

Vanessa has concentrated on her writing since becoming widowed in 2001, as being a single mother of a disabled child made it impossible to work the required shifts in NHS Biochemistry laboratories. 2006 saw her beginning her writing career proper with the publication in the US of Witch-Finder, a collection of short paranormal adventures. Since then two further collections of paranormal short stories, Hard Lessons and Shadow and Salvation along with two related novels, A Date with Darkness and A Knight of Wolves, have also come out. The dystopian fantasy novel, Pill Wars, and the time travel dystopian thriller, Last Days Forever, are a new direction.